Sometimes, equipment that is supposed to be designed with safety in mind turns out to be unsafe. Here’s an example I came across a few years ago: a mains-powered smoke alarm installed in a top-floor flat: 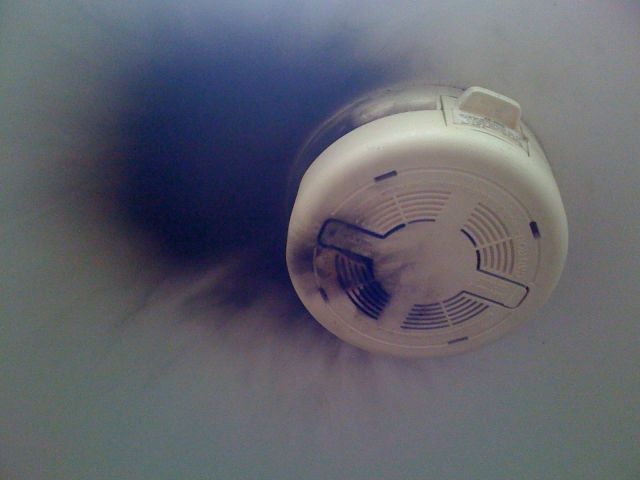 It developed an internal short circuit, spewing flame and soot. Fortunately, the breaker for the mains circuit it was powered from tripped before it set fire to anything. It’s ironic that a device intended to detect a fire should be capable of starting one! Also, given that the current consumption of this device should be very much lower than the 6A rating of the circuit breaker, I was surprises that it didn’t have a built-in fuse.

My second example is a 4.7nF Class Y1 capacitor from a Xerox Phaser printer, which was connected between mains input (after a fuse) and chassis to help suppress EMI:

Class Y1 capacitors are tested to 8kV and there should be no risk of them going short-circuit. Although it hasn’t gone short circuit (it reads 4.1nF and >20Mohms on my multimeter), something has gone very wrong with it, because the printer suddenly started tripping both the RCD in the socket it was plugged into and the consumer unit RCD, as soon as it was turned on. [RCD = Residual Current Device, also known as a GFCI = Ground Fault Circuit Interrupter.] This implies that there was a dangerous amount of current passing between between the mains live wire and chassis, with a risk of severe electric shock if the earthing failed and there was no RCD in the circuit. I traced the fault to this capacitor.

Class Y capacitors are usually made from metallized polyester film, which has the useful characteristic that if an are area of the dielectric film breaks down, the resulting current vaporises the surrounding metal film, which isolates the damaged area. But this one is a Murata KX472M ceramic capacitor. I have replaced it and another similar one in the printer PSU by metallized polyester Class Y capacitors.

This entry was posted in Electronics and tagged class Y capacitor, smoke alarm. Bookmark the permalink.