The Bendix-King KI-525A HSI and associated KCS-55A compass system was a popular avionics upgrade for light aircraft until the advent of the Sandell electronic HSI and, more recently, glass-cockpit systems from Garmin, Aspen and others. Although it is a mechanical device driven by some electronics, these units can give years of trouble-free service. I know of one component they use that has been reported to fail quite often (a bipolar tantalum capacitor, C110) – when it does, the symptom is that the glideslope pointer fails to appear, or takes a long time to appear, or appears erratically. However, I want to share with you my experience of another glideslope pointer issue with one particular unit, and suggest a test to perform if you have a KI-525A in your light aircraft. 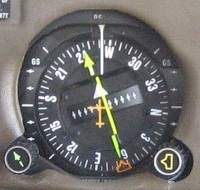 The issue came to my attention when I had a Garmin 430 installed. The KI-525A had been fitted several years previously. Naturally, I had the KI-525A coupled to the 430 (it had previously been coupled to a KX165 nav/comm set).

Some while later, I noticed a problem. After starting the aircraft engine, while waiting for it to warm up I would turn on the avionics and the GNS430 would go through its self tests. One of the tests that the 430 does is to set the HSI deviation to half-left and the glideslope to half-up. What I noticed was that the deviation was always half-left, but the glideslope indicator was nowhere in sight. The strange thing was that if I actually flew an ILS, the glideslope pointer appeared and behaved properly, and in agreement with the no. 2 display driven from the KX165 (which had been relegated to nav/comm 2).

I reported this to the company that had installed the unit and serviced my avionics. They sent the HSI off to an authorized repair facility. It came back “no fault found”. So I had them send it off to a different facility – with the same result. Altogether, I think I had the unit sent away 4 times, and in each case no fault was found. I asked to speak to one of the authorized repair facilities directly, but I was told they didn’t want to speak to me and weren’t interested in trying to fix the problem.

My avionics company suggested scrapping that KI-525A and putting in a previously used one that they had available. They lent it to me to try out, and it worked just fine during the self-test. So there was definitely something wrong with my HSI, despite all the “no fault found” reports.

I was reluctant to pay a significant amount of money for a used HSI that was actually older than mine and an earlier variant. Seeing that licensed avionics technicians had failed me, and being knowledgable in electronics, I decided to track down the problem myself. I obtained a copy of the KI-525 maintenance manual from the internet and studied it. It wasn’t long before I spotted something:

I regard this as a serious deficiency in the test procedure. The specification in the Pilot’s Guide for the KCS-55A compass system says the system as a whole requires 11.0V to 15.8V, so the glideslope indicator should work down to 11V. Imagine the scenario: you are flying your light single in IFR when your alternator fails. Fortunately, you notice this (in UK registered aircraft there will be a big red flashing light to tell you about it). Even more fortunately, there is an ILS-equipped airport just a few minutes away. The weather there is only just above minimums, but you reckon that if you conserve power, your battery will last long enough to make an ILS approach. So you make for the airport and intercept the localizer… but the glideslope never appears. The best you can do is try a localizer-only approach, if there is sufficient visibility.

What should you do about it? I suggest the following:

Are there many KI-525A units out there that don’t work at low voltage, or is my experience a one-off? My KI-525A had previously been sent for repair due to a glideslope issue, so maybe it worked at low voltage before that. Is there a more recent version of the manual than revision 7, with an updated final test procedure? I’d love to know the answers to these questions. If you do run a low voltage test on your KI-525A, please post your results in a comment to this post.

This entry was posted in Light aircraft avionics and tagged HSI, KI-525A, KI525A. Bookmark the permalink.